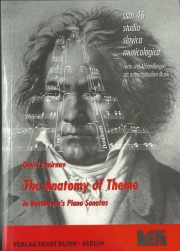 This sonata was dedicated to Carl von Lichnowsky (1756-1814), a Prince of Polish background, Mozart’s pupil and Beethoven’s patron. There is a general uncertainty as to whether Beethoven chose the title ‘Pathétique’ or if the title was added by his publisher, but whatever the case, the attraction of the title certainly added to the piece’s immense popularity. However, this pronounced epithet was not the only reason for the sonata’s popular appeal. The structure of the piece brings something quite new and original into the world of music. The relevance of a particular statement from Webern is apparent here: ‘…new music is that which has never been said. Therefore new music would be what happened a thousand years ago, just as much as what is happening now, namely, music that appears as something never said before.’[1]

The sonata does not contain a ‘dance movement’ (scherzo or minuet), but instead it has a very notable slow introduction that returns twice (before the development section and before the coda of the first movement). This represents a kind of hidden fourth movement within this three-movement cycle.

The actual sizes of the structural elements of the theme exceed their borders – each one finishes on the strong beat of the following bar, which coincides with the beginning of the next section. Therefore, the half-cadence of the antecedent actually finishes at b. 19 and has not 8, but rather 9 bars. The same happens with the consequent, and so on, and this is why the whole length of the theme is not 24, but in fact 25 bars. It is possible to find the origin of this effect in the length of the 7-note main motive, which is certainly produced from the 6-note motive of the introduction by rhythmic simplification and the addition of the last note.

The motive that occupies two bars, actually exceeds the borders of these two bars and finishes on the first beat of the third, unlike the example from the closing theme of the finale of the Fifth Symphony Op. 67-IV, where a similar rhythmic pattern actually finishes before the bar line:

In this sonata the repetition of the motive enters on the next beat of the bar forming the syncopation that works like a spring, creating a huge stream of energy. The content of this vessel is larger than the vessel itself, and bursts out of its mould. The intervallic characteristic of the motive (in semitones) is very unusual: (I)+4+1+2+1+3+1, if one takes into consideration the fact that +4 is the major third (in the minor key!) and +3 is not a minor third, but an augmented second. The major third at the beginning means that harmonically the theme begins with an artificial dominant on the tonic, which is quite outstanding. The melodic shape of both antecedent and consequent creates the image of a spear thrown to the sky, reaching its apex and then losing speed and falling down.

Both antecedent and consequent are built as sentences. The 7-note motive is repeated and followed by two more repetitions that are altered by reduction and augmentation at the same time. Firstly the motive is reduced into four notes (the first three notes of the initial form of the motive are omitted), and then into just two notes (only the two last notes of the motive remain). However, the rhythmic units are augmented, and as a result of this double operation both abridged motives occupy the same space as the original motive and its repetition.

From
A Complete Thematic Catalogue