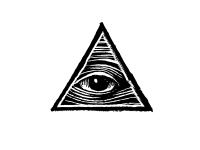 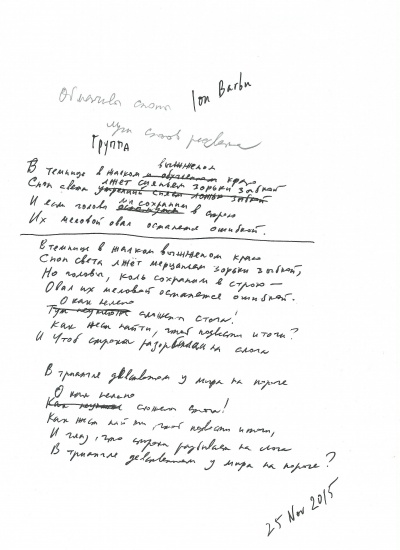 This poem describes Barbilian’s reflections on group theory, as a method which attempts to depict the ‘highest states’ of being. For Barbilian the mathematician and mathematical humanist, it should theoretically be possible to do this through mathematics, and in particular group theory, but as he has described in his prose work, and across Joc secund this attempt is frustrating and ultimately unsuccessful. “Grup” is a static poem that draws on mathematical imagery to represent an image of creative promise and suggestion that is ultimately stultified. The mathematical images are those that suggest the promise – the ideal towards which Barbu is struggling – but, as he said of his poetry as a whole, ultimately he failed to reach his ideal.

In this regard, the group, as far as Barbilian conceives of it, is a prison in the sense that it is a concept that traps, rather than illuminates; on the burned unworthy earth are found the earlier foundations of mathematics that have to some extent been discredited, but not yet adequately replaced. These mistakes and misrepresentations are evident in ‘deceives’ and ‘error’ (itself a mathematical term). The rays and threads are potentially hopeful, but their innate propensity for confusion – i.e. “left-handedness”, or cackhandedness – suggests failure. The aim is to find a ‘closed gesture’ in the sense of a neat and tidy theorem, or a unified grand theory,661[3] that will give the lie to the straight-lined Euclidean view of geometry, in favour of a possibly more accurate triangular concept. In hyperbolic, or non-Euclidean space, the angles of a triangle sum to less than the standard one hundred and eighty degrees. The ‘eyes’ may be the angles in this case.662[4]

Moreover, closed-ness is a property of groups and their operation. For Barbilian in the 1920s group theory was a new and exciting field, with many as yet unexplored future possibilities. Group theory was central to developments in modern algebra, it was drawn heavily upon in the development of non-Euclidean and projective geometries, and as a field in itself held out the promise of bringing the kind of unity to disparate fields of mathematics sought after by Hilbert and others. Of any of the poems that are analysed for their mathematical content, “Grup” is the one most consistently chosen by interested critics, perhaps because of its overtly mathematical title, given Barbu’s known interest in group theory. Gyorgy Mandics describes “Grup” as about finding a universal and analytical system of knowledge by revealing alternative possibilities of being.663[5] Basarab Nicolescu views “Grup” as somewhat of an exemplar, arguing that Joc secund

See note 614 in its entirety refers to a transformation from reality into abstraction; in other words real concepts are examined through abstract group theory.664[6]

References to sun and lightrays are common to the entire collection and underline the repeated image of sight, vision, and the struggle to understand and represent, as well as their underlying essence as the “lines” of geometry (including in non-Euclidean geometry). (It should also be noted that ‘light’ in Romanian, lumina, is very close to the final word of “Grup”, world, lumea.) For Nicolescu the ‘fânul razelor’ (most literally, hay of beams) is a geometric term, particularly in optics. In my translation of fânul razelor I have chosen to draw on Frosin’s interesting French translation of fânul as gerbe (sheaf [of hay/wheat]), because gerbe is also a term used in homological algebra, associated with the francophone and former Bourbakian Alexander Grothendieck who later extended sheaf theory into his later work on category theory.665[7] The wheat sheaf also allows for the image of germination and new life, reinforced by Frosin’s translation of “day” as the aurore, and his translation of ‘fringi’ as ‘fauche’ (reap), and introduction of the term ‘creation’ in the last line.

Returning to geometric lines, ‘fire stîngi’, are also geometric, and can be interpreted to include the bent or non-parallel lines of non-Euclidean geometries. The ‘ovaluri de var’ for heads suggests for Nicolescu a monochrome existence, with the ovals suggesting something unstable and human.666[8]

The poem “Grup” thus encompasses a number of familiar geometric images such as ovals, left and right, line, and triangle, and it touches on more modern developments within geometry. Interestingly, these images are both geometric, as well as algebraic as suggested so obviously in the title. This is an evocative and succinct way to unify algebra and geometry within one short poem.

This translation draws, with modifications, from translations by Paul Doru Mugur and George Băjenaru in respectively Boskoff, Dao, and Suceavă, “From Felix Klein’s Erlangen Program to Secondary Game,” 20; Băjenaru, “Ion Barbu or the Revelation of the Sublime,” 192.