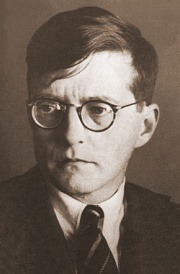 Dmitry Dmitrievich Shostakovich (1906-1975) was one of the greatest composers of 20th century. But this musical genius was born and grew up in a very hostile social and political environment.

After revolution of 1917 all composers, artists, writers and practically all people in Russia were deprived of their freedom of expression. They had to follow the strict rules and regulations invented by their political leaders. And if someone would dare to make any deviation from those rules, the punishment should follow. These leaders accepted arts only as an instrument of propaganda and their glorification. Vladimir Lenin stated:

Such conditions should destroy any talent. Art, music, literature can’t survive in these circumstances. But despite this, quite miraculously, they survived.

Shostakovich was seriously punished in 1936, when his opera Lady Macbeth of Mtsensk was named Мuddle instead music (Сумбур вместо музыки) in the “Pravda” newspaper. He was announced “the enemy of people” (враг народа) and expected the arrest.

The second punishment came in 1948, on 13th of January Meeting of the Soviet Musicians, and in the February Party Resolution (so called Zhdanov decree), as well as in the April infamous auto-da-fé of the First Congress of the Union of Composers. Shostakovich was criticized for his musical formalism, misusing of dissonance, a gloomy and nervous character of his music, and a cosmopolitan “hermetic” musical language in his two operas, the last four symphonies (Nos. 6, 7, 8 & 9), String Quartets an many other compositions. He was advised to follow the folk music idiom to make his music more accessible to the people.

Shostakovich publicly agreed, repented his sins and promised to improve himself as soon as possible. In the August he set to music eight texts from the collection of Jewish folk poetry translated into Russian – completely in that “simple folksy musical idiom, not offensively difficult or modern”[3], as he had been advised.

But why he had chosen Jewish folklore? He explained it to his younger friend a composer Rafail Khozak:

Let us look at the text of the first song of the cycle which is incredible “sad in a heart” but set to the music with such a jolly dancing rhythm:

Shostakovich explained this in more detail in his testimony to Solomon Volkov:

Volkov added: “In a country that had just been lashed by a vicious wave of anti-Semitism, a prominent composer had dared publicity to present a work that spoke of the Jews with pity and compassion. This was both a musical and public event.”[6] Shostakovich hated anti-Semitism in any form. He suppesedly told:

But already 1943 Stalin began a propaganda campaign of Russian patriotism against so called “ruthless cosmopolitanism." This was openly anti-Semitic campaign where the word Jew was just replaced with the word “cosmopolitan”. On 12th of January 1948 a great actor and the artistic director of the Moscow State Jewish Theater Solomon Mikhoels was murdered on the orders of Stalin. To be a Jew became dangerous, and set Jewish poetry to music became dangerous too. 31st of August 1948 Stalin’s henchman 52 years old Andrey Zhdanov died in a hospital from the heart attack. Later it was announced that he was killed by Jewish doctors. Step by step this led to the “Doctors’ plot” campaign in 1952-3. Stalin believed that the “ruthless cosmopolitans” were going to kill Soviet leaders. Many doctors and not only doctors of Jewish origin were arrested. As it turned out, this accusation was fabricated and had nothing to do with the truth. The campaign was finished after the death of Stalin on 5th of March 1953.

After a series of private performances the official premiere took place on 15th January 1955 in the Maly Hall of Leningrad Philharmonia sang by Nina Dorliak, Zara Dolukhanova and Alec Maslennikov, accompanied by Shostakovich himself.

One day he suddenly learned that Anna Akhmatova “expressed her displeasure over the weak words” he used for this vocal cycle. Shostakovich supposedly said then:

Shostakovish was a great master of keeping “a fig in his pocket.” It means that you can speak anything you don’t agree with, at the same time keeping a fig in your pocket. And this is the only way to express the truth in the harsh dictatorial regime (if you not considering suicide). This song cycle is such a “fig in a pocket”, where music sounds jolly and speaks the truth about people’s tragedy.