I wanted to present in this work the musical portraits of three artists of the 13th-15th centuries who stood at the beginning of European painting: Giotto, Durer and Rublev, and convey my impression of their works, such as Giotto's frescoes from Capella dei Scrovegni in Padua, particular “Christmas”, “Flight into Egypt”, “Kiss of Judah”; Durer's engravings from the Apocalypse series, especially the “Four Apocalyptic Horsemen”; as well as the icons of Rublev “Trinity” and “Christ Pantocrator”.

I used for this a special technique based on the idea of ​​a musical monogram, conventionally called “cryptophony,” that is, a technique of encoding verbal text using sound names. I have been developing my own version of this technique since 1965 and use it in many of my writings. My coding system gradually changed until it had the following appearance: 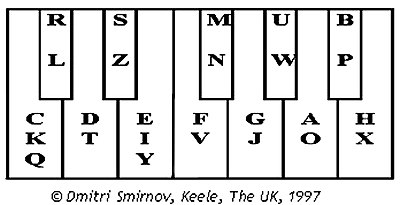 As it can be seen, all the letters of the Latin alphabet here are duplicated according to their sound similarity, and partly coincide with the traditional system used in the music by Bach, Schumann, Shostakovich and many other composers.

Here, in the "Three Portraits", the names of the artists are transmitted by notes, which form melodic and harmonic complexes in such a way that almost the entire musical fabric consists of these sounds.

The first movement is built as a passacaglia with basso ostinato, and is read as GIOTTO:

Then another part of the name of this artist DI BONDONE is gradually built up in the tuba party:

The second movement, as if depicting the flight of four apocalyptic horsemen, immediately begins with a four-fold statement of the name DURER: 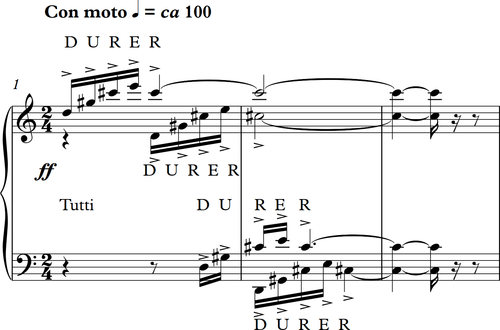 The first name of the artist ALBRECHT is stated in batches of bassoons and contrabassoon beginning from bar 11:

The first half of the third movement is entirely built on the name ANDREY. The sounds of this name stratify all the harmony:

Then the same name appears in its full form in the melody, in the parts of the first and second trumpets:

The entire second half of the 3rd movement, beginning in bar 38, is built on a sharply dissonant chord made up of the sounds of the artist’s full name: ANDREY RUBLYOV: